Posted on December 4, 2016 by ButterSugarFlowers 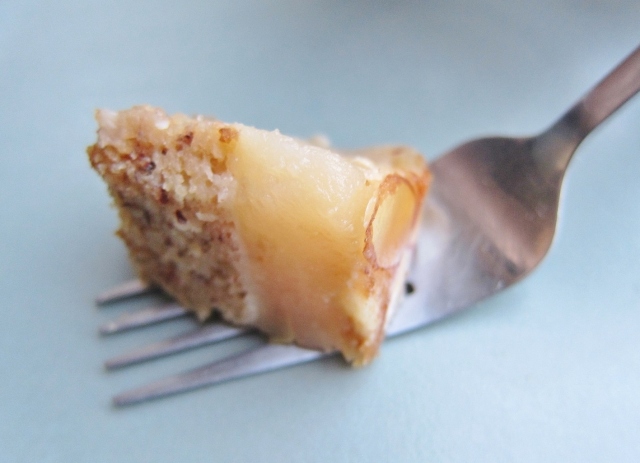 At a Spanish restaurant not long ago, the most delicious dessert (of the many I tried) was surprisingly simple: creamy vanilla ice cream with sherry poured over the top. The sherry was so fragrant, caramely and warming, I knew it had to soon make an appearance in one of my future dessert creations. When I ended up with a mountain of apples not long after, the pairing seemed meant to be: an apple-sherry cake was in the works. 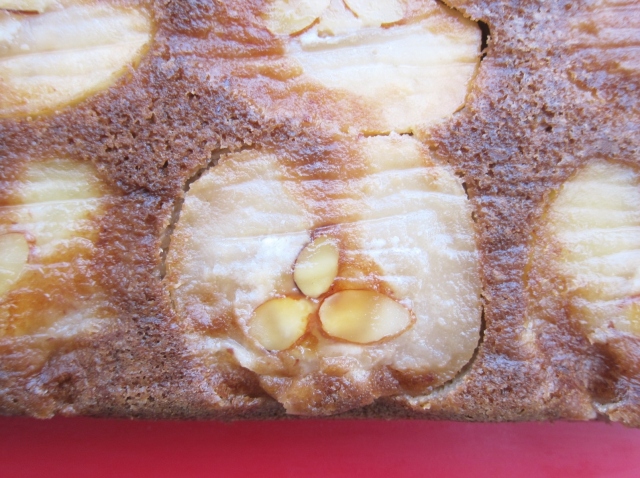 I desired a recipe that would use a lot of apples, and I wanted to make sure each slice of cake held a significant amount of fruit. I also craved cooked apples that were super tender, for a melt-in-your-mouth texture that would amp up the comfort-food factor. Pre-roasting halved apples in butter and booze was the perfect solution, and it helped showcase the sherry with its soft warmth infused into each apple. What’s more: the leftover sherry-butter would go straight into the cake batter, along with more sherry and some apple juice for extra moisture and natural sweetness. 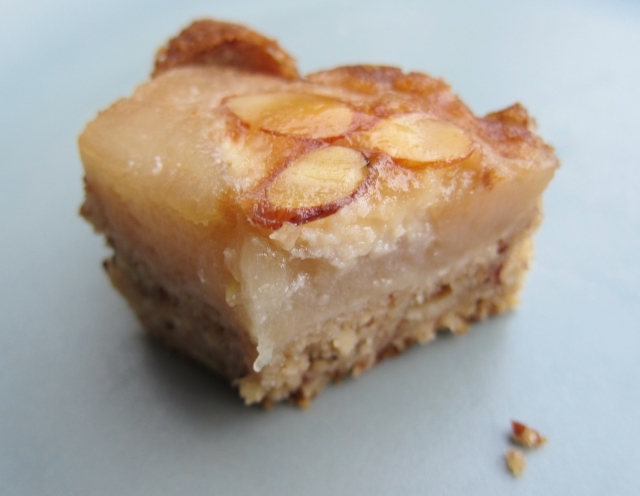 When it came to the batter, I decided to reach for toothsome, nutty almond meal alongside flour, and turbinado sugar for its mellow sweetness with hints of molasses. To echo the flecks of almond within, I stuffed each apple with sweet almond paste (marzipan works, too) and a topping of sliced nuts — which is not only decorative but also helps keep the paste from sticking to the pan or parchment. Finally, on some occasions, I’ve added a bit of minced fresh rosemary to the recipe; it’s a delightfully herbal complement to the assembly of ingredients — though the cake is also perfectly delicious without it. 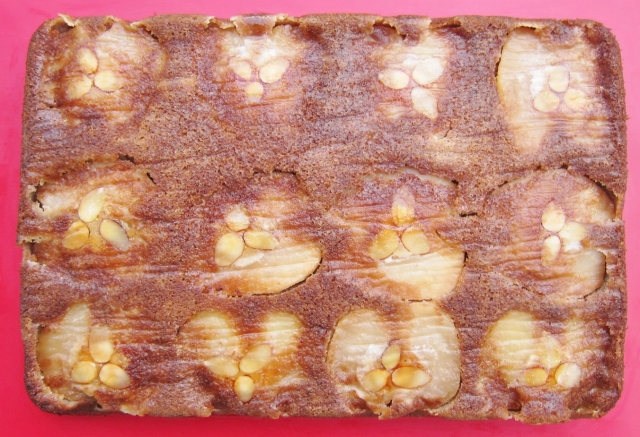 While this turned into an admittedly long recipe, the steps are all simple and flow together with ease. Plus, you can shorten the time by prepping the dry ingredients and almond paste balls while the apples pre-bake. In the end, the result is surely worth the process: an utterly delicious cake that elicits lots of oohs and ahhs with its succulent texture and luscious, comforting flavors — as well as a nice size that will satisfy a crowd.

*more of this ingredient will be needed later; see below.

Remove and discard apple stems. Peel apples and cut each one in half down the center. Scoop out seeds and core of each half using a small rounded spoon. Use a paring knife to remove any lingering spine or stem pieces. Set apples cut side down and check to make sure they are all no thicker than about an inch, and are all about the same thickness. If needed, gently trim thin slices from the non-cored sides of apples, in order to create the right size. 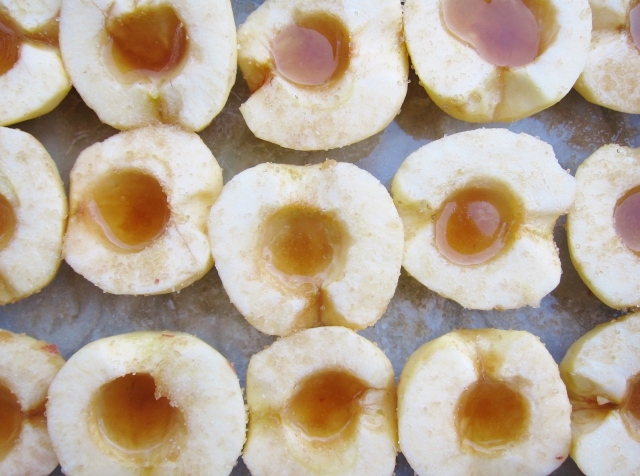 Preheat oven to 350 F. Line inner bottom of a 9 x 13” pan with parchment, then spread 2 tablespoons of the melted butter evenly onto parchment. Place apples in lined pan cut-size-up; you should have 12 to 16 apple halves, depending on size. Whisk remaining 2 tablespoons melted butter with 1/3 cup sherry. Spoon all of the mixture over apples, filling the cored-out centers and letting it overflow. Sprinkle evenly with ½ teaspoon salt and 2 tablespoons turbinado sugar. 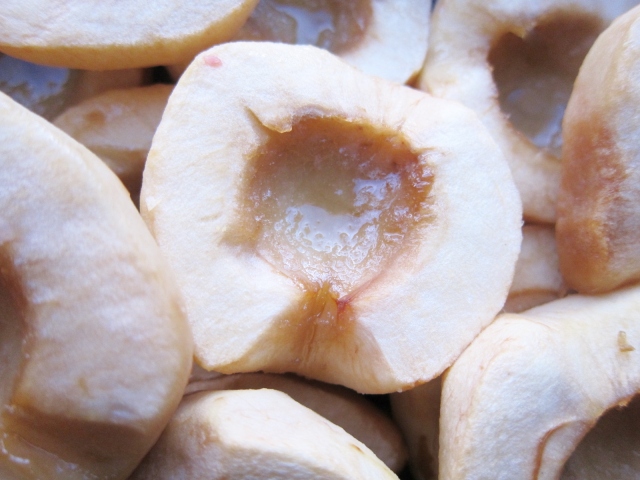 Bake for 30-35 minutes (a bit shorter if apples are very small). Remove apples from oven; leave oven on. Let apples cool in pan until cool enough to handle. Then transfer apples to a plate, cut side up — leaving all liquid behind in the cake pan for now (you’ll need it later). 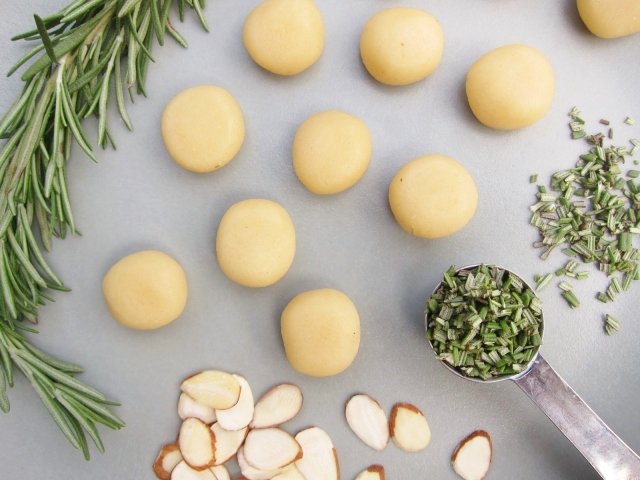 Shape almond paste or marzipan into small, slightly flattened balls that will fit into each apple center without poking out (you want the apples flush against the pan). Press at least three almond slices firmly against a flat side of each ball, then gently place in apple centers, almond side up. The sliced nuts will help keep almond paste from sticking to the parchment when baked (do not skip). Set aside. 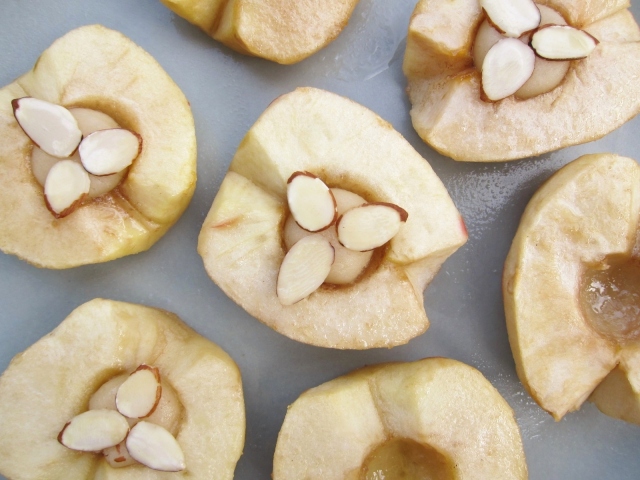 With oven at 350 F, pour remaining sherry-butter liquid from pan into a measuring cup that holds at least ¾ cup liquid. Set aside. Remove and discard parchment, and wipe out baking pan with a paper towel. Re-grease inside of pan and line with a fresh piece of parchment, leaving a generous overhang on the long edges. Then generously grease the parchment at the bottom of the pan where apples will sit when baked. 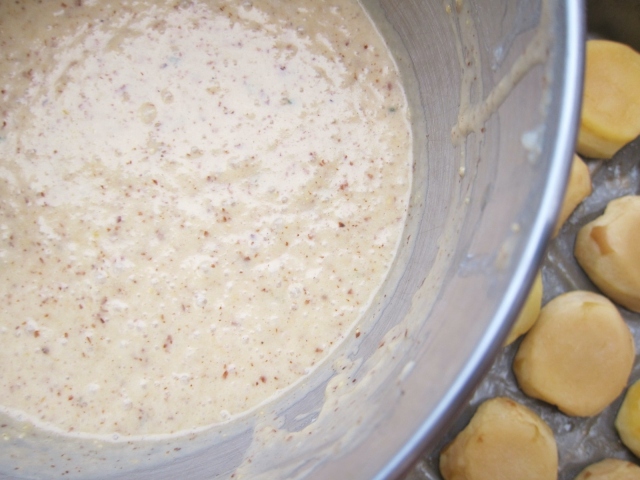 Place stuffed apple halves cut side down in pan, very gently pressing into place so that apples are flat against the parchment. Set aside.

Into a medium bowl, sift the flour, salt, baking soda and baking powder. Whisk in the almond meal until evenly dispersed and no lumps remain. Set aside. 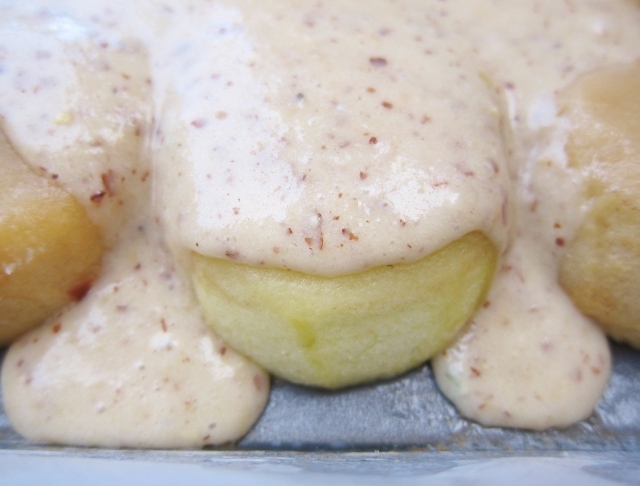 In a large bowl, mix turbinado sugar and melted butter. Beat in eggs one at a time, followed by both extracts. Add the mixed dry ingredients in 2 – 3 portions, alternating with the apple juice, stirring until ingredients are incorporated. Be sure to scrape bowl often with a rubber spatula as you mix. 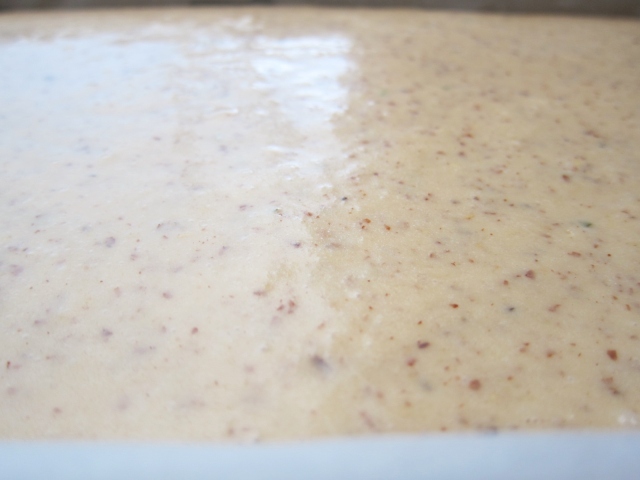 Add more sherry to the leftover sherry-butter liquid to make ¾ cup total liquid. Add to batter and mix just until consistency is even and smooth. Fold in rosemary if using, stirring until evenly dispersed. Slowly pour batter over the arranged apples. Then tap pan gently on counter just 2-3 times to release any hidden air bubbles. 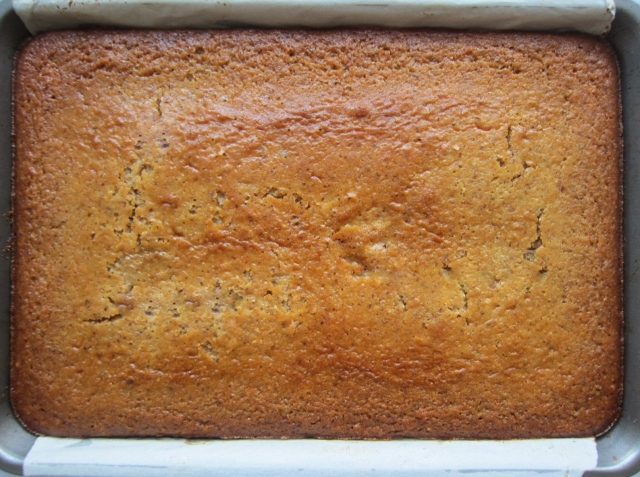 Bake on center oven rack for about 35 minutes or until a toothpick inserted in the center (preferably between apples) comes out free of wet batter. Surface will be toasty brown; don’t worry if it cracks — the top becomes the hidden bottom. Remove cake from oven and let cool in pan until lukewarm or room temperature. When ready to serve (preferably between 2 – 8 hours of baking), invert cake onto serving plate or cutting board. Remove parchment, cut and enjoy! Cake tastes best at room temperature or slightly warmed. 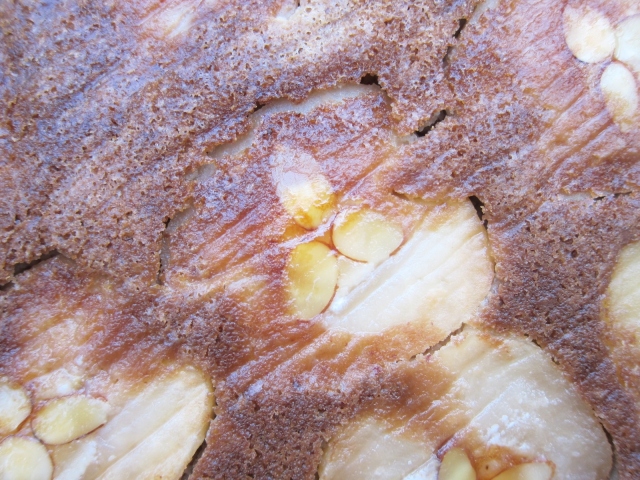 Maybe next time…  Feel free to use a different, not-runny filling in place of the almond paste: perhaps halved walnuts, or another firm nut paste like pistachio or chestnut, or even a little ball of cookie dough — oatmeal or almond cookie dough would be fantastic! (Just don’t be tempted to skip stuffing the apples all together; the apples will float to the top of the cake inconsistently.) While sherry inspired this recipe and works wondrously, dark and/or spiced rum would be a fine substitute, as would bourbon or brandy. Or, for a booze-free version, reach for apple juice instead. Finally, brown or muscovado sugar will also work in place of turbinado. 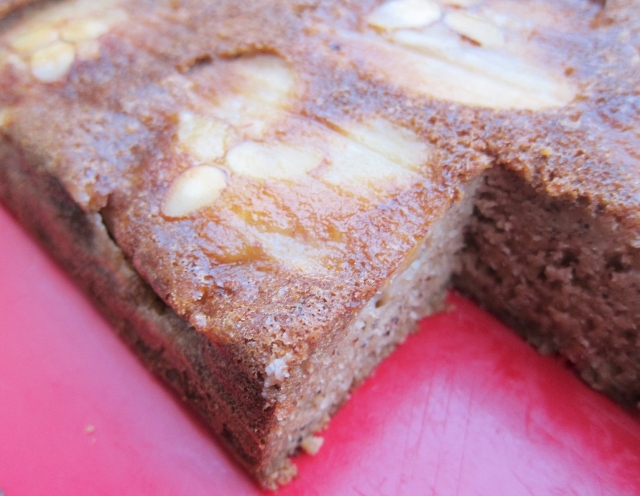 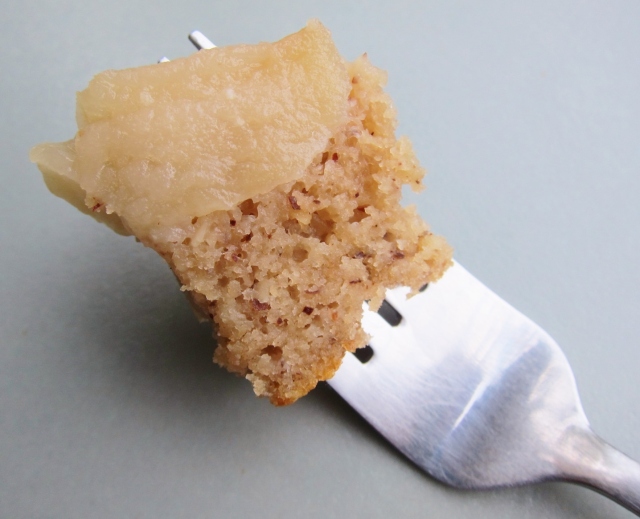 4 Responses to Rustic Almond Apple Cake with sherry and rosemary