Posted on October 25, 2012 by ButterSugarFlowers

Until about a week ago, a stalk of bright yellow flowers peered over my fence from next door.  The blossoms were reminiscent of sunflowers but smaller, and they really towered high at close to ten feet.  On the day the flowers disappeared from my neighbor’s yard, I noticed their absence but didn’t give it a second thought — until I found an unusual gift on my front porch.  It looked a bit like ginger but lacked the signature aroma.  After a bit of research and a chat with my generous neighbor, I found out that I’d been given the very roots of the those swaying yellow flowers, which are part of the sunflower family, after all.

Sunroots, also called sunchokes or Jerusalem artichokes,  are knobby and brown with little speckles of purple.  Crisp and white inside, their texture is much more like a potato than any artichoke, and it turns out they have no origins in Jerusalem — at least not that I can find.  Everyone I talked to suggested that I use them as a replacement or addition in a savory potato-like dish.  This sounded fine, but when I tasted their mild, slightly tangy and pleasantly earthy flavor, two specific words began popping into my mind: spice cake!

Preheat oven to 350 F.  Grease sides and bottoms of two 8” round pans, and line bottoms with parchment or dust pans with flour.  Beat the first five ingredients very well, until even in consistency and color.  Sift the next five (dry) ingredients over the egg mixture.  Mix until incorporated, scraping sides and bottom of bowl with spatula.  Strain lemon juice and measure out 1/4 cup, then gradually add the 1/4 cup juice with the vanilla extract to the batter.  Fold in the lemon zest and sunroot until even.  Divide batter into prepared pans.  Bake for 35-45 minutes, until toothpick tests clean when inserted in center.  Let cakes cool completely in pans.  Invert when ready to decorate and serve.  Store and eat at room temperature.

With its moist crumb and spicy-sweet flavor, this cake proved to be delicious despite its unusual main ingredient.  The addition of lemon seemed to complement the tangy quality of the sunroot, while the molasses and cloves paired well with its earthy attributes.  In fact, one taster thought he detected a welcome little hint of cedar with each of his mindful bites.  As for my neighbors, I think it’s safe to say they were happily surprised by such a rare reincarnation of the root.  After all, their unexpected dessert was quite full of fall flavor, a remarkably local ingredient, and a whole lot of gratitude from my little kitchen next door.

Maybe next time…  Like carrot cake or zucchini bread, sunroot spice cake invites the addition of raisins or chopped nuts.  I also have a hunch that orange zest and juice would match just as wonderfully in this recipe as lemon, and that a bit of almond meal would be yummy in place of some of the flour.  One taster perked up and declared, “cream cheese frosting!” — which is indeed a lovely idea; the two cake layers could even be stacked, filled, and iced.  And of course, this recipe can be easily halved if you don’t need two 8″ rounds.  Finally, sunroot spice cake makes as wonderful a breakfast treat as it does a nice dessert. 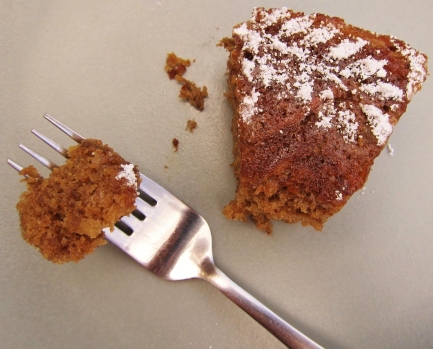 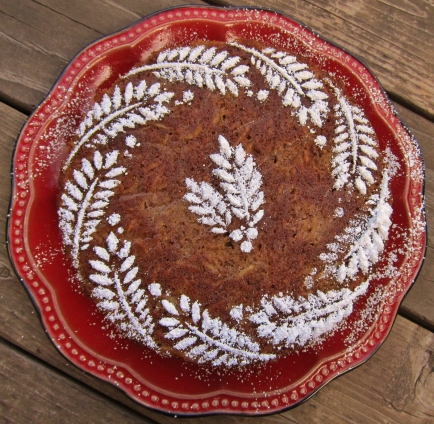 It’s true: I made another spice cake quite recently.  I could tell you how the two I’ve made differed in flavor and format, but really, I blame this glorious season.  In the fall, the aroma of baking spice cake is so heavenly that I have a hard time resisting the urge!