Posted on March 16, 2014 by ButterSugarFlowers

I realize that cilantro falls into the same polarizing category as coconut, licorice, and raisins: for everyone that loves it, someone else hates it with a passion — whether it’s simple preference or genetics that cause the disdain. (If you aren’t a fan, please return for a cilantro-free recipe in a few weeks.)  As for me, I was in college when I first fell in love with fresh cilantro. The enamorment started somewhere between my visits to the shady but addictive burrito shop (which was open until 3AM) and my casual cooking lessons with my roommate’s family, who came to visit from Honduras from time to time. 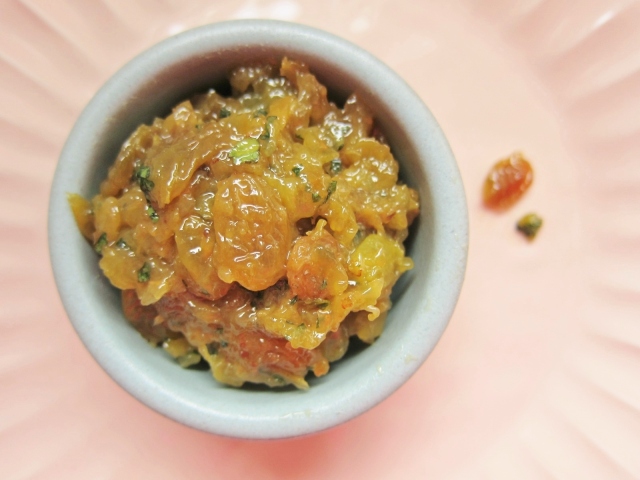 In spite of my love for cilantro, I never really thought I’d turn it into a dessert.  For one, I wouldn’t want to bake it into anything, as its flavor disappears and changes when heated. Plus, I couldn’t imagine it any better than it was as a savory herb.  But then I brought home a bag of tangy golden raisins that I’d planned make into hamantaschen filling.  Mindlessly unpacking the groceries and sampling all the way, I ended up with both cilantro and sultanas in my mouth at once. To my delight, the harmony of flavors sparkled! Golden raisins and fresh cilantro were a marvelous match, perfect for a new dessert. Instead of cookies, my sultanas became an unbaked honey-herb filling for tiny pie crusts made with cornmeal and lemon: a splendid celebration of cilantro as a sweet.

Look closely through the raisins and remove any wayward stems. Place 2 cups (about 9 ounces) of the raisins in a small to medium saucepan, setting aside the remaining half cup. Rinse, dry, and finely zest the peel of one lemon; set zest aside for crusts. Juice the lemon and strain the juice. Repeat juicing and straining with the second and, if needed, the third lemon — stopping when you have a total of 1/2 cup lemon juice.  Pour juice over the raisins and bring to a low/medium heat. Let gently simmer until most but not all of the juice is absorbed, about 6-10 minutes.  Remove from heat and let cool to room temperature.

Place cooled raisins in the bowl of a food processor along with the cilantro leaves.  Process with blade attachment for about a minute, then stop to scrape sides and bottom of bowl. Repeat 2 or 3 times, drizzling with the honey as you do.  Stop when honey is evenly distributed and even, small pieces of raisins and cilantro have formed (large leaves should not be present).  Mixture will be sticky and thick.  Remove from food processor and fold in the reserved half cup of whole sultanas, stirring until evenly dispersed.  Cover and chill until ready to use.

Preheat oven to 350 F.  Grease cups of a miniature muffin pan; set pan aside.  Place frozen butter pieces and flour in the clean, dry bowl of a food processor.  Pulse for just a few minutes, until fine crumbs have formed and no large butter chunks are present.  Stop food processor, add all remaining ingredients, and pulse again just until combined. Dough will still appear crumbly, but it will hold together when squeezed in the palm of your hand.  Resist the temptation to overmix it.

Separate dough into tablespoon-sized pieces, weighing 20 grams or 0.7 ounce a piece; you should have 15.  Roll each piece into a ball, flatten slightly, and press into greased mini muffin pan, pushing up the sides and pricking the bottoms gently with a fork (not all the way through).  Bake for 16-18 minutes; edges will be quite golden brown.  Remove from oven, let sit in pan for just a few minutes, and then use a fork to carefully tilt each crust to allow airflow beneath it. Let crusts fully cool before filling, storing cooled crusts in an airtight container if not filling the same day.

TO ASSEMBLE THE PIES:  Fill each cooled pie shell with a generous scoop of sultana-cilantro filling (at least a tablespoon per pie).  If desired, sprinkle tops of pies with sifted powdered sugar.  For the brightest flavor, eat on the day they are made.  Store them covered and refrigerated until ready to eat, finishing them off within a day or two. 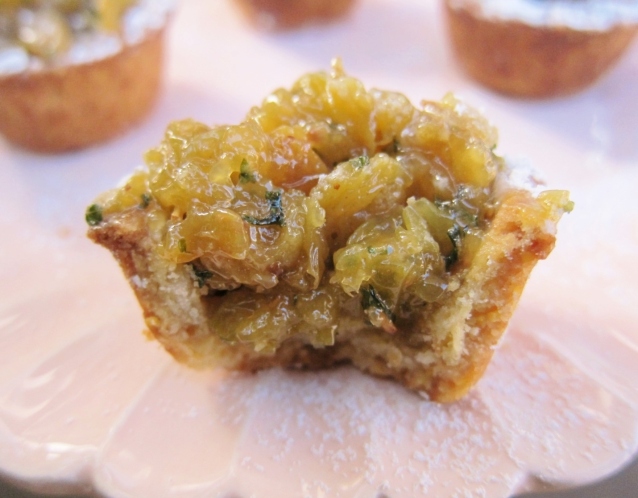 With their crisp, buttery, cornmeal-flecked shells, these petite pies offer a refreshing dessert format for the beloved herb within.  The tender golden raisins and lively bits of cilantro prove to make a deliciously balanced pair — all enhanced with tart lemon in both the filling and the crust. Sweet, gooey honey adds a welcome warmth to this otherwise tangy treat, just as the complexity of textures provides a pleasant, toothsome–and even addictive–eating experience that’s scrumptious but not too sweet.

Maybe next time… Lime is well known to match nicely with cilantro, and it would make a great substitute for the lemon in this recipe.  The same is true with orange, which would also bestow a little more sweetness to these tangy treats.  To offer a subtle echo of cilantro in the crust, try adding 1/4 teaspoon of its ground seed — coriander — to the dough.  If you want to keep this dessert refined-sugar-free, skip the powdered sugar all together (they’re just as delicious unadorned), or consider whipping up some honey-sweetened cream or icing to drizzle over the pie tops.